Nigerian goalkeeper Vincent Enyeama, who showed brilliant performance as part of the national team at the 2014 World Cup, reportedly received $130,000 (over N20 million) as appearance fee for the Mundial. 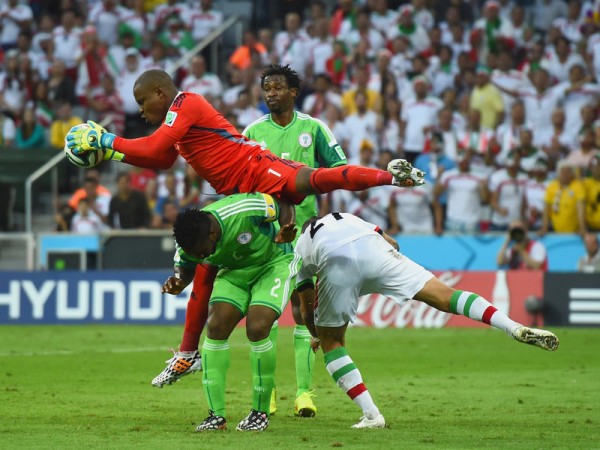 Photo: Vincent Enyeama makes save in Nigeria vs Iran match

Nigerian Tribune refers to the words of one of the officials:

“It was not a flat rate, but some of the players like Enyeama, who were involved in both the qualifiers as well as the World Cup in Brazil got as much as $130,000.”

The mentioned amount is said to be the one apart from the match bonus and daily allowances provided to the Super Eagles players.

AfricanFootball.com also reports with reference to several top team officials that players who qualified Nigeria to a fifth World Cup got a share of the FIFA largesse.

According to the disclosed data, team officials were also not deprived of the largesse, which corresponded at least $25,000.

The source added however:

“There was a big issue among the senior players whether those who were part of the qualifiers should also get something. At the end of the day, skipper Joseph Yobo prevailed that they also have to be included. So, even some players like John Utaka and Raheem Lawal, who played a couple of qualifiers, will also get something.”

It would be recalled that throughout the tournament Vincent Enyeama was ranked first among the goalkeepers in two June ratings due to the numerous close-range saves.

Days after the Super Eagles elimination from the World Cup, information surfaced that the victorious Lille goalkeeper quit the team.