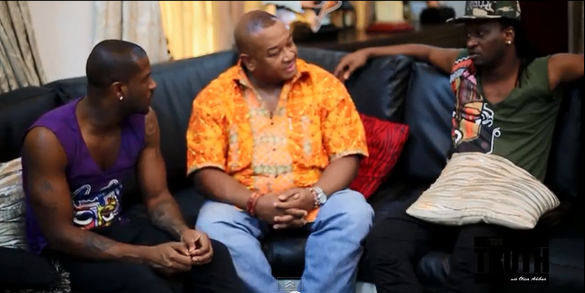 On the latest episode of Olisa Adibua’s “The Truth”, Peter and Paul Okoye of Psquare finally addressed their much publicized fight which threatened to cause a split between the music duo.
According to the Okoye brothers, their fight was never

about women or money. Rather it was about the fans, it was about picking songs they believe their fans would love. Read Excerpts below:

You guys had a little rift not too long ago, everything is settled now. What was it about?
PETER: The truth and nothing but the truth is it had nothing to do with money, it had nothing to women, it’s just a normal thing like where you argue or quarrel with your sibling. It’s normal. The only sad thing about it is that it got out. After all, when it was happening, we were still performing shows. So people took our private life to our business which I don’t blame them. But the fact that they took it too far. I and Paul are.. it’s not even a rift, the thing was mere argument.

What was the argument about?
BOTH: It was about music.

And it just got of hand or what?
PAUL: Ok, let me give you an example of what it’s like. You see… when it comes to music I am somebody that even if I want to bring something new, the new stuff I bring I still want to maintain it us but he wants to bring something different. And for me, it was like you cannot change how we do things, if you want to change, do it gradually. But you can’t just switch fast, it’s going to affect, it’s going to hit us So it had to do with the music, the song selecting because there were songs he preferred and there were songs I preferred. And this thing has happened before during the days of ‘Do Me’.

PETER: Like you remember during the days of “Do Me’, I never liked “Do Me’.  I never liked “Do Me’. How we finally ended up selecting that song was Jude because we had about 28 songs. He said “Peter, choose your best 5, Paul choose your best 5″. Paul’s best 5, “Do Me’ was inside, I never selected it. That was how we released that album although Paul won because in that album, “No One Like You”, “Ifunanya”, most of his own selection went far but mine was more like …it happens in every album. You know the truth, let me be very honest, this whole fight, quarrel between PSquare is for the fans that we were fighting for. Because we were trying to bring out the best. If we had just done it anyhow, at the end of the day we will start looking for who to blame.