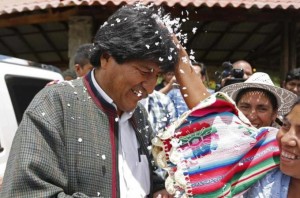 The polls have been thrown open in Bolivia, where around six million legible voters are to cast their ballots in presidential and congressional elections largely expected to end with a sweeping victory for President Evo Morales.

The country’s first indigenous president appears poised to win a third consecutive presidential term. He is also expected to win a legislative majority, permitting him to forge ahead with his campaigning pledges of consolidating his socialist system that has expanded the role of the state in the economy and sharply reduced poverty levels.

Morales has been favoured in pre-election polls to defeat his main rival by a wide margin of 40 points and win over all nine Bolivian states.

The former coca union leader has become such a institutionalised figure that stadiums, markets, schools and state enterprises have been named in his honour.

Morales has been credited with being an able steward of Bolivia’s natural gas and mineral wealth.

Since he first came to office in 2006, a boom in commodities prices has increased export revenues nine-fold and the country has accumulated $15.5b in international reserves and economic growth has averaged five percent annually, well above the regional average.

Morales has used the windfall to create subsidies for schoolchildren, pensions for the elderly and to pull about half a million people out of poverty.

On the other hand, he has also drawn opposition from environmentalists and many former indigenous allies by promoting mining and a planned jungle highway through an indigenous reserve.

Despite Bolivia’s economic advancements, it remains one of South America’s poorest countries and many economists think it depends too much on natural resources.

In the first half of 2014, natural gas and minerals accounted for 82 percent of export revenues.

Morales promotes coca’s traditional uses and claims zero tolerance for cocaine. But his government’s ability to combat crime and corruption has been questioned.

Last year, Transparency International’s perception index ranked Bolivia as South America’s third most corrupt country after Venezuela and Paraguay, and Morales’ opponents say he has spent millions in government money on his campaign, giving him an unfair advantage.