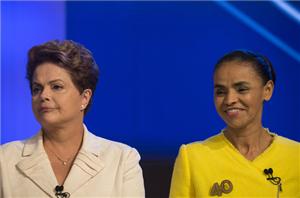 The people of Brazil are in final preparations to vote in Sunday’s presidential elections, with the main candidates busy making a final push.

According to a survey by pollster Datafolha, Rousseff is holding on to her commanding lead with 44 percent voter support.

Neves, a pro-business Social Democrat senator, has 26 percent of voter support versus 24 percent for Silva.

A separate poll by the Ibope research institute showed Neves with 27 percent, Silva with 24 percent and Rousseff with 46 percent.

All surveys showed Rousseff defeating either candidate by more than five percentage points in a likely runoff, which will take place on October 26 if no candidate wins a majority of valid votes in the first round.

The election, expected to be the closest in a generation, is widely seen as a referendum on 12 years of government by Rousseff’s Workers’ Party (PT).

The country is divided between voters loyal to the PT for an economic boom that lifted millions from poverty in the 2000s and those calling for an end to the corruption scandals, poor public services and four years of disappointing growth tainting Rousseff.

For months Rousseff, 66, a former guerrilla who was jailed and tortured for fighting the country’s 1964-1985 dictatorship, looked poised to coast to an easy victory.

However, the race was dramatically altered on August 13 when the third-place Socialist candidate Eduardo Campos was killed in a plane crash and replaced by Silva for the presidential bid.

The proponents of change are now split between Silva, 56, and Neves, 54, from the powerful Social Democratic Party, which ruled the country from 1995 to 2002.

Silva, who belongs to Brazil’s surging Evangelical Christian community and says she wants to be the diverse country’s first “poor, black president,” was initially projected to beat Rousseff in a runoff but has now slipped back into the spot Campos occupied before his death.

Neves has, meanwhile, closed the 20-percentage-point gap that separated him from Silva barely a month ago, re-emerging as the top contender to face Rousseff in the second round.