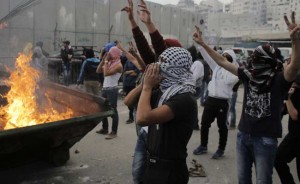 Police said on Sunday that suspected Jewish extremists has set fire to a classroom in an Arab-Jewish school located in Jerusalem, targeting a symbol of co-existence in a city on edge over a recent surge in violence. Reuters report:

The premises were empty late on Saturday when assailants torched a classroom used by first-graders at the Hand in Hand school, where Palestinian and Israeli children study together in Hebrew and Arabic.

“Death to Arabs” had been scrawled on a schoolyard wall.

More than 600 pupils attend Hand in Hand. From pre-school to high school, its student population is divided equally between Jews and Arabs. There are four other such schools in the Hand to Hand network in Israel.

The smell of smoke still lingered in the air when children came to school on Sunday, the first day of the working week in Israel. A police forensic team worked in the burnt classroom where charred books were scattered on the floor.

Tearful mothers dropped off their children and about 150 people held a protest outside against the violence.