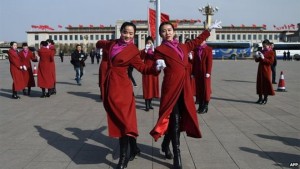 China has rejected calls from several foreign governments for it to free five women’s rights activists who have spent nearly three weeks in detention. BBC has more:

Foreign ministry spokesman Hua Chunying said that nobody had the right to ask China to release the group. The activists were planning public campaigns against sexual harassment. They were arrested in early March in the run-up to China’s top political meetings, which coincided with International Women’s Day.

The BBC’s Celia Hatton in Beijing says grassroots groups in China have been reporting a marked rise in the detention of political activists, as the ruling Communist Party moves to suppress political opposition.

Ms Hua said in a daily briefing to reporters on Wednesday that Beijing “hoped relevant people would stop interfering in China’s judicial sovereignty”. Her remarks came a day after the UK’s Foreign Office said it was “deeply concerned” about the ongoing detention.