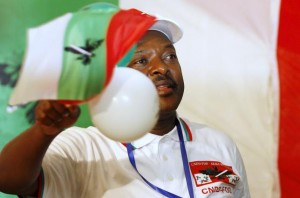 Burundi’s ruling party chose President Pierre Nkurunziza to run for a third five-year term on Saturday, a move critics say is unconstitutional and may trigger unrest in the east African country. Reuters was there:

Opposition groups promised protests if Nkurunziza ran, saying it would undermine a peace deal that has kept the country calm for a decade since an ethnically fueled civil war ended in 2005.

Two months before the presidential election, Nkurunziza was nominated at a meeting of nearly 1,000 members of his party, which grew out of a Hutu rebel movement. “No one will stop the CNDD-FDD party,” the president declared.

“I call people to go to the election in peace,” he said after the decision. “But I would like to warn everyone: whoever wants to create problems with the ruling party elected by the people, he’ll find himself in trouble.” Party chairman Pascal Nyabenda urged the police and security forces to take action against any street protesters.