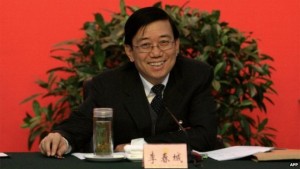 Li Chuncheng, an ally of China’s former security chief, Zhou Yongkang, has gone on trial for corruption, say officials. Mr Li is the former deputy party boss of Sichuan province, and is charged with bribery and abuse of power. Read more from the BBC:

He is among several men linked to Mr Zhou who have been arrested in an ongoing anti-corruption campaign. Mr Zhou himself has been charged with bribery, and is so far the most senior official in China caught since the crackdown was launched in 2012.

Mr Li did not raise objections to any of the charges laid out in court on Thursday, according to the Xianning city court’s statements on its Weibo account.

It gave no details on his alleged crimes. The investigation into Mr Li’s case began in 2012 – last year he was stripped of his post and party membership. From 1998 onwards, Mr Li had overseen the development of Chengdu, the capital city of Sichuan province which served as Mr Zhou’s powerbase. Mr Li quickly rose through the ranks under Mr Zhou, who was at that time the party boss for Sichuan.