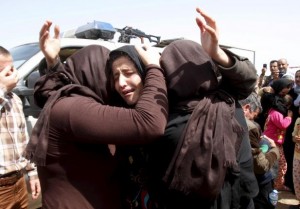 More than 200 elderly and infirm Yazidis were freed on Wednesday by Islamic State militants who had been holding them captive since overrunning their villages in northwestern Iraq last summer. Reuters report:

A Reuters reporter saw the group of 216 people, which included two Christians, handed over to Kurdish forces near the city of Kirkuk. Some were too exhausted and disoriented to speak.

One elderly woman said she had been captured by the insurgents last August when they overpowered Kurdish forces in the Sinjar area and proceeded to purge its Yazidi population, killing hundreds and taking thousands captive.

The woman, who asked not to be named, said she had told her son and two young daughters to run away as the militants closed in, but stayed behind herself because she was unwell and did not want to slow them down.

“I had lost hope of seeing my children again, but today it has happened,” she said as they embraced her and wept. It was not clear why the radical jihadists had decided to release the Yazidis, whom they consider devil-worshippers, but the group previously freed 200 more it was holding under similarly mysterious circumstances.