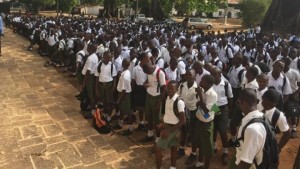 Schools have reopened across Sierra Leone nine months after they were closed because of the Ebola outbreak. BBC went there:

The government hopes that the studying time lost by the country’s 1.8 million children can still be made up. The United Nations Children’s Fund (Unicef) says that the reopening of Sierra Leone’s schools marks “a major step in the normalisation of life”.

New cases of Ebola continue to be reported in Sierra Leone but numbers are declining. The BBC’s Umaru Fofana reports from the capital Freetown that the pupils are “really excited” to be going back despite concerns about Ebola.

To allay fears and ensure that there are no new Ebola cases, the first day at school will be spent on Ebola education and going through basic hygiene rules.  Unicef has trained 9,000 teachers in Ebola prevention and is also supplying hand washing facilities to every school.

But some schools in the east of the country contacted by our correspondent said that they had not yet received new teaching materials or even the health and safety gear that was promised.