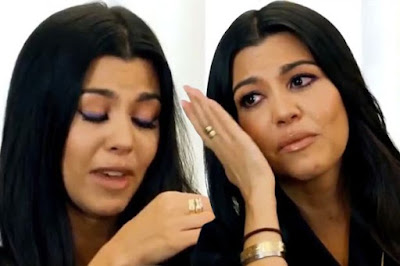 Keeping Up With The Kardashians viewers will get to see how hurt Kourtney Kardashian was after she learned of Scott Disick’s cheating rumours via Daily Mail.

In a preview clip from an upcoming episode of the E! series, Kourtney, the mum-of-three, who broke up with her boyfriend of nine years this summer, couldn’t hide her heartbreak as pictures emerged of Scott getting close to his rumoured ex-girlfriend Chloe Bartoli in Monaco.

Momager Kris could be seen sitting at the table with a tearful Kourtney and Kim and she got very angry when she read the story of Scott’s romance online.

A devastated Kourtney then said to her sister Kim.

“I’ve worked so hard to keep this family together,” she tells her as she wipes away tears.

“Kourtney has always taken Scott back and been by his side, but now with three kids it has gotten old,” a source said at the time.

“Kourtney has to do what’s best for the kids.”

But despite Scott, 32, missing his family, he is not prepared to change his partying ways.

A source said: “Scott misses his family, but it’s not enough to motivate him to change. He doesn’t have the constitution to cure himself of his issues.”