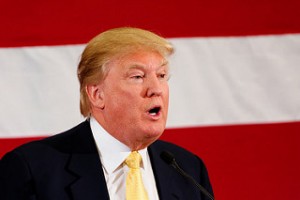 Donald Trump’s Republican presidential bid has received the backing of Sarah Palin, the populist ex-governor of Alaska who was the Republican vice-presidential candidate in 2008. “Are you ready to stump for Trump?” Ms Palin asked cheering supporters at a campaign rally in Iowa.

She was John McCain’s running mate in 2008 before they lost to Barack Obama. Despite retiring from politics in favour of a media career, she remains an influential conservative voice. Officially announcing her endorsement, Ms Palin said Mr Trump was someone ready to let US troops “kick Isis’ ass”, using another name for the self-styled Islamic State group.

“We are ready for a change,” she told the rally in Ames, Iowa.  “He (Trump) is beholden to no one but ‘we, the people’. He is perfectly positioned to let you make America great again.” The New York businessman, who leads the Republican race, said in a statement that he was “proud” to receive her backing.

Ms Palin was a “trusted conservative” with a “proven record of being fiscally modest, staunchly pro-life and [she] believes in small government that allows businesses to grow and freedom to prosper”, the statement added.