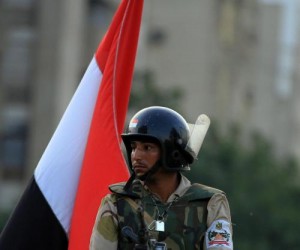 The Egyptian military admitted to making a mistake when they sentenced a four-year-old boy to life in prison last week. The court was supposed to sentence a 16-year-old for murder, but sentenced the four-year-old instead because he had a similar name, spokesman Col Mohammed Samir said on Facebook.

Ahmed Mansour Qurani Ali was convicted in a group of 115 men who were said to be part of a Muslim Brotherhood riot in 2014, despite Ali’s lawyer providing documents that proved Ali was only a year old at the time. The teen the military were intending to convict was Ahmed Mansour Qurani Sharara.

The four-year-old’s conviction is the latest embarrassment for a court that has already become an international laughing stock. The United Nations declared in 2014 the country had “a judicial system where international fair trial guarantees appear to be increasingly trampled upon” after more than 1,200 people were given death sentences in a pair of mass trials “rife with procedural irregularities.”

Ali’s lawyer said court officials didn’t pass the child’s birth certificate to the judge before he was convicted of four counts of murder, eight counts of attempted murder and vandalizing government property. U.S. Secretary of State John Kerry urged the Egyptian government last summer to use greater care in dealing with its opposition

“It is important to distinguish between those who use violence to achieve their ends and others who seek peacefully to participate in a political dialogue, even if what they say may sometimes make people uncomfortable,” Kerry said at the time.