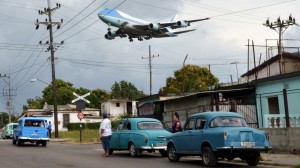 President Barack Obama has called his trip to Cuba a “historic opportunity” in his first comments after becoming the first serving US leader to visit the state in almost nine decades.  The three-day visit marks the culmination of thaw in relations between Washington and the communist island that began in December 2014.

Obama arrived in Havana on Sunday evening with his wife and daughters and is due to meet Cuban President Raul Castro later on Monday. “It’s been nearly 90 years since a US president stepped foot in Cuba, it is wonderful to be here…for the first time ever Air Force One has landed in Cuba,” he said during a speech at the US embassy in Havana shortly after his arrival.

“This is a historic visit and it’s a historic opportunity to engage directly with the Cuban people and to forge new agreements, commercial deals, to build new ties between our two peoples.”  Al Jazeera’s Lucia Newman, reporting from Havana, said the visit had excited Cubans, many hopeful of what the newly re-established ties could bring.

“Many Cubans were actually saying they needed to pinch themselves, that they could not really believe that an American president was finally coming to their country,” she said.  “People want to know what the president is going to say…he will be addressing the Cuban people on Tuesday [and] this message will be broadcast live on Cuban television.”