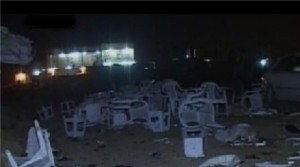 A suicide bomber has blown himself up at a football stadium south of the Iraqi capital Baghdad, killing at least 30 people and injuring 95 others.  The blast in Iskandariya happened in the early evening on Friday at the end of an amateur football game, Falah al-Khafaji, the head of security for Babel province, said.  The Islamic State of Iraq and the Levant (ISIL) – which controls large areas of the country’s north and west – later claimed responsibility for the attack.

Mobile phone footage widely shared by Iraqis on social media showed players in football kits gathering to collect trophies and footballs as at least one child stood nearby. One man throws a new football to the crowd, before the camera shakes violently and the footage ends, at what witnesses said was the moment a bomber in the crowd detonated an explosives belt.

Several photographs posted to social media showed mangled goal posts smeared with blood. One image showed a close-up of a football, also covered with blood. “The suicide bomber cut through the crowd to approach the centre of the gathering and blew himself up as the mayor was presenting awards to the players,” Ali Nashmi, an 18-year-old eyewitness, told the AFP news agency.  The mayor, Ahmed Shaker, was among the dead. “I was maybe 50 metres from the spot. The blast was extremely loud,” Haidar Kadhem, a 20-year-old who survived the explosion, said.

“Most of the crowd were young people, I could see them strewn across the field, some dead, others wounded asking for help. It was just chaos.” An apparent escalation of large bombings in areas outside ISIL’s control suggests that Iraqi government forces may be stretched thin after recent gains against the group in the western and northern provinces. At least 60 people were killed earlier this monthin an attack claimed by the group 80km further south, in Hilla, when an explosives-laden fuel tanker slammed into a government checkpoint.

“Iskandariya is a Shia town,” Al Jazeera’s Jane Arraf, reporting from Baghdad, said.  “What ISIL is trying to do is to restart the sectarian war that boiled over in Iraq several years ago and they are doing that by attacking Shia targets – ordinary people or market places- in the hope that there will be retaliation.”

Share
Facebook
Twitter
WhatsApp
Previous articleWoman Dies In Bizarre Accident As She Was Pinned By Own Car At Coffee Stand
Next articleUS Kills ISIL Finance Minister In Syria
- Advertisement - Ad ==> TRUTH FINALLY OUT! Discover how a young Nigerian graduate now makes a consistent 40k per week doing a legitimate online business. You too can start yours now, click here!!!