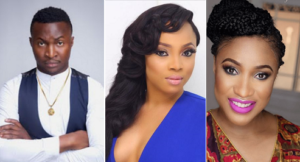 Comedians are known for mocking celebrities in their jokes, while some don’t mention names of the person, others apologize immediately after the joke, but comedian funnybone wasnt having any of it, the comedian came for toke makinwa and tonto dike over their failed marriage(s).

Funny Bone went in hard mentioning both ladies names. Part of the ‘joke’ he rendered was that Toke Makinwa and Tonto Dikeh should let us rest and keep their family matters to themselves.

Speaking on Tonto, he said; you lie say your husband give you wetin him no give you, who beg u make u lie?.

On Toke, ‘Toke commot for her husband house she no let social media rest’.

The diss went on and he concluded telling both ladies to keep their family matters to themselves.