1. Michelle LaVaughn Robinson was born Jan. 17, 1964, to Fraser and Marian Robinson. The family lived on the South Side of Chicago, and Fraser worked for the Chicago water department. Michelle attended the Whitney M. Young Magnet School.

2. Michelle followed her brother to Princeton University, where she graduated in 1985 with a bachelor’s in sociology and a minor in African-American studies. For her thesis, “Princeton-Educated Blacks and the Black Community,” she surveyed black alumni on their racial attitudes since graduating.

3. Michelle then attended Harvard Law School, earning her degree in 1988. After law school, she went to work at the Chicago law firm of Sidley & Austin.

4. At the law firm, she met Barack Obama. He was a summer associate; she was his adviser. While Michelle wasn’t initially interested in a romance, she soon changed her mind. On their first date, Michelle and Barack saw Spike Lee’s Do the Right Thing. 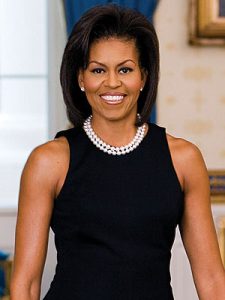 5. In the early 1990s, following the death of both her father and a close friend from college, Michelle reassessed her life. Rethinking her career path, she decided to leave the corporate law world to work in public service. She took a job in the mayor’s office and then in the city’s office of planning and development. In 1993, Michelle became the founding executive director of Public Allies Chicago, an AmeriCorps national service program that provided training to young adults pursuing careers in the public sector.

6. In 1996, Michelle moved to a position with the University of Chicago. By 2005, she had worked her way up to a vice president spot at the University Medical Center.

7. Barack Obama’s career was launched into the national spotlight when he delivered a speech at the 2004 Democratic National Convention. On his way to the stage, Michelle reportedly gave him a hug and told him (breaking the tension): “Just don’t screw it up, buddy.”

8. Michelle and Barack have been married since October 1992. The couple has two young daughters: Malia and Sasha.

9. The Obamas work hard to give their daughters a grounded life. When Obama was on the road as a senator, they used webcams to see and talk to one another.

10. Michelle is a Stevie Wonder fan, and exercise is a favorite hobby (she reportedly used to get up at 4:30 a.m. to run on a treadmill).