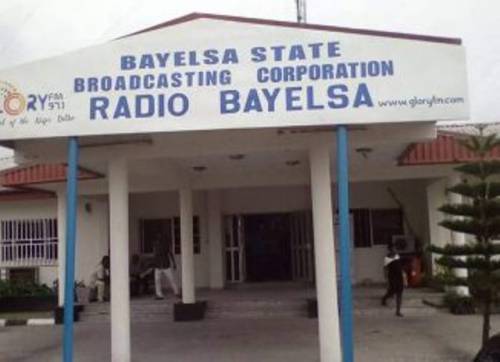 Journalists of Radio Bayelsa today in Yenagoa embarked on a procession around the city to protest Sunday’s killing of their staff, Famous Giobaro.

The protesters, led by the Director of News and Current Affairs of the station, Timiebi Sammy Ebiye, urged the state police command to fish out those responsible for the murder.

Many members of the staff, weeping uncontrollably, carried placards with various inscriptions such as, “Why Kill a Journalist,” “Police Fish Out Famous’ Killers,” “Government, Ensure Security in the State,” and “We Are Mourning.”

The first stop of the protesters was the Nigerian Television Authority (NTA) in Yenagoa, where Mrs. Ebiye described the killing as wicked.

She expressed worry about the insecurity in the city and charged the police to begin an investigation of the murder.

Also speaking, the General Manager of Radio Bayelsa, John Idumange, who was a part of the procession, described the shock of the management and staff over the death of one of its dedicated editors.

Mr. Idumange, who assured that the management would improve the security system in the station, urged the staff to come up with useful information that would help the police unmask the perpetrators of the evil act.

David Emiebor, the State Chairman of RATTAWU, expressed the condolences of his union to the Nigeria Union of Journalists over the untimely death of Mr. Giobaro, and also challenged the police to get to the root of the murder.