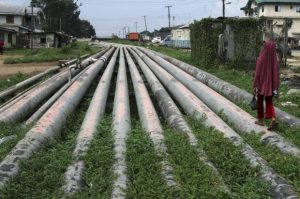 There have not been any form of pipeline vandalism in the past three months in the Niger Delta region of the country,  this was said by the Minister of petroleum, Ibe Kachikwu, made this known at the ongoing Oil Technology Conference 2017 holding in Houston, Texas, United States.

A statement by the Director of Press in the Ministry of Petroleum Resources, Idang Alibi, stated that the near zero rupturing of pipelines in the oil rich region was mainly due to the consultations and ongoing discussions with Niger Delta stakeholders.

According to the statement, pursuing peace, security and stability in the Niger Delta was an integral aspect of the implementation of the ministry’s target for the year.

Mr. Kachikwu had announced in 2016 that the government was working hard to record no vandalism of oil pipelines in 2017.

He also explained that there were efforts to substantially reduce youth restiveness in the Niger Delta.

Nigeria relies on oil proceeds as it main source of revenue.

But the agitations by militants in the oil rich Niger Delta region had severely stifled the nation’s oil production capacity target of over 2.2 million barrels of oil per day.

The development triggered the exception granted the nation by the Organisation of Petroleum Exporting Countries, OPEC, when it agreed on production cut deal in November 2016.
Nigeria’s oil production has since increased to two million barrels a day, according to official figures.

Meanwhile, according to the statement, the minister attributed the latest development to sustained engagement with the host communities to ensure the security and protection of infrastructure, as well as with international oil companies to take more for securing assets in the region.

Mr. Kachikwu, the spokesperson said, also explained that delegates from the area met with President Muhammadu Buhari in 2016, which was followed up by the visits of Vice President Yemi Osinbajo to virtually all oil the producing states across the country.