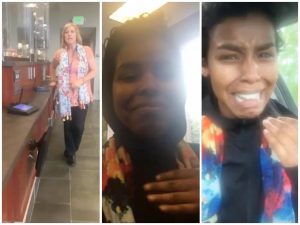 A young Muslim lady was  out of a banking hall in Washington, US where she had reportedly gone to make car payment. Jamela Mohamed claims she was singled out and forcefully expelled from Sound Credit Union bank because she was covering her head with a hijab.
Even though there was a sign that stated, ‘hats, hoods and sunglasses are not allowed’, Mohamed, who was wearing sweater and a hood, says it did not occur to her that her hijab would be an issue, until she walked into the banking hall.
So they said please remove hats and hoods,” Mohamed recalls. “Why am I seeing a man being serviced with a hat on and I’m being told to take off my hood?” she asked. Footage of the incident shows a few other male clients in the bank wearing baseball caps and who, according to Mohamed, were not being asked to get rid of their caps. “I didn’t even get to utter another word. The bank staff threatened to dial 911 if I wasn’t going to comply. I feel so embarrassed right now,” Mohamed told a local media.
In the video, which she shared on social media, Mohamed says she would not wish to see anyone go through what she went through at the bank. “Nobody should ever be treated this way…” she says. Thaddeus Martin, her lawyer, argues that his client did not refuse to comply with the bank’s rules, but she had issues with the selective application of the rules. “She was seen as a threat and actually treated as a threat,” the lawyer says. The bank has since issued an apology through its Facebook page, accepting that they did not handle the situation well.
Source: ( Gossip.naij.com )