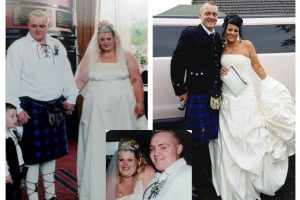 A married couple were overweight when they first got married, went back to renew their vows after they had lost weight – shedding a combined 14 stone.

The couple identified as Janice and William Robertson piled on the pounds as they shunned exercise and gorged on fast food before getting married first time around. But when 36-year-old William was diagnosed with diabetes the couple decided to turn their lives around.

The pair looked at their wedding pictures and realised that they weren’t happy with the way they had looked on their big day. Janice was forced to wear a size 22 dress when the couple first got hitched as she was unable to find another which fit her.

And after joining a slimming class and shedding a combined 14 stone, they decided to renew their wedding vows on their ten-year anniversary. Friends and families were left stunned the couple’s completely different appearance at their second wedding.

They celebrated their ‘second’ wedding and said “I do” in front of loved ones during a ceremony at Pauline’s home. The couple were surrounded by close family and friends including their three children.