Home News Feed I Only Steal Generators – Suspect Caught In Lagos
Facebook
Twitter
WhatsApp
A Lagos thief has begged for mercy after he was caught trying to steal a generator saying he is not a big thief. 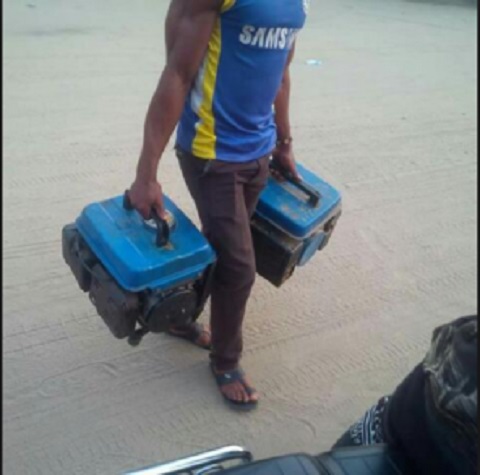 A 20-year old man, Abubakar Adamu has confessed that he is not a big thief because he only steal generators from the owners without causing any violence, PM Express has reported.
Adamu said when he go to any house to steal generator, if the owner was around, he will leave and steal from those whose owners were not around and hid it in his truck he use to move round. He said he used his truck to pretend as a scavenger whereas it was a cover up to steal generators from their owners.
However luck ran out on him after he was apprehended at Idowu Osifodunrin street in Ira-Akari estate in Isolo, Lagos while trying to steal a generator. After he was handed over to the police, he charged before Isolo Magistrates court for stealing four generator sets which he hid inside his truck.
The incident happened at Idowu Osifodunrin street in Ira-Akari estate in Isolo, Lagos where he was held and apprehended before he was handed over to the police.
At the Ira-Akari estate police division where he was taken, Adamu admitted that he stole the generators. He said he used the truck to hid the stolen generators and cover it with scavengers he pick from houses to to cover them.
He also revealed that he gain access to houses under the false pretence of picking scavengers and any generator the owner  kept outside, he will carry it and hid it inside the truck.
Adamu was then charged to court with two count charge and he pleaded guilty. The prosecutor, Oje Augbale presented facts and asked the court to sentence him accordingly to serve as deterants to others who may want to commit similar offence.
The court found him guilty as charged and sentenced him four years imprisonment without option of fine.
However, the court also ruled the sentence will run concurrently which implied that Adamu will be spending the next two years in prison custody. While Adamu was being taken to the prison he said if he comes back he will not steal again.