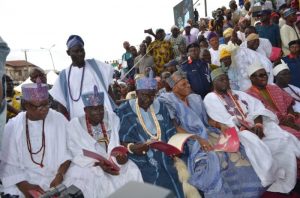 The Olubadan of Ibadanland , Oba Saliu Akanmu Adetunji Aje-Ogungunniso 1, and the former Governor of the state, Senator Rashidi Ladoja, the Osi Olubadan, were absent at trhe coronation of the new Obas in Oyo State.

The new staffs of office of different colours, heights and shapes emerged at the event while the new monarchs filed in and paraded at exactly 2:42pm. Quite conspicuous were two types of crowns: pure white crowns and multi-colour crowns.

Ajimobi assured Olubadan that the elevation of some of his high chiefs would not affect his entitlements which he referred to as “Isakole”, warning him against being used and misguided by some disgruntled politicians.

“After this event, I will pay a visit to Olubadan to greet him and explain things to him. He is a good father. But let me tell him to be weary of some politicians who have surrounded him with the aim of misleading him. We beat him in politics and this time around, we have beaten him again”.

Performing the official presentation of the staff of office to the new monarch, Ajimobi said, “On this note, in the exercise of the powers conferred on me by Section 28(i) Cap. 28 Vol. 1 of the Chiefs Law of Oyo State of Nigeria 2000, I have promoted 33 Chiefs to Obas in Ibadanland today August 27, 2017. This is in line with the provisions of the recently amended 1959 Declaration of Olubadan and other related Chieftainship in Ibadanland, and the Government White Paper as conveyed in Government Gazette No 14, Notice 27 Vol.42 of 23rdAugust, 2017 and Gazette No 15 Notice 28 Vol. 42 of August 24, 2017 respectively”.

The governor charged the new obas to use their elevated royal positions to promote peace and unity of the citizenry, urging them to desist from anything capable of tarnishing their esteemed position.

He added, “We also congratulate the Olubadan of Ibadanland and advise that Kaabiyesi should remain the father of all Ibadan citizens and not allow himself to be used by disgruntled politicians as observed in his recent utterances which tend towards the political. It should be noted that Obas are not expected to play politics”.

The governor, who declared that he was overwhelmed by a deep sense of history, culture, and tradition, noted that the event marked a turning point in the history and cultural heritage of Ibadanland, saying, “It is a day that great sons and daughters of Ibadanland have come together with a strong sense of patriotism, assembled in the historical, cultural and symbolic Mapo Hall to elevate, to uplift, to transform, to reposition the chieftaincy Institution of Ibadanland. Our resolve to reposition the Ibadan Chieftaincy institution is substantiated by the words of the famous author, Henry James when he said “A tradition is kept alive only by something being added to it”.

He said, “I am therefore highly delighted to be here at this momentous occasion where history is being made in Ibadanland. Today, we are all gathered to witness the crowning ceremony, presentation of certificates and staff of office to the high chiefs who are members of the Olubadan – in Council and 13 Baales in Ibadanland who have been elevated to the position of obas. This is an epoch making event in the annals of the history of Ibadanland and a practical demonstration of our administration’s commitment to the enhancement of dignity and honour of the chieftaincy institution in Ibadanland and Oyo State in general”.