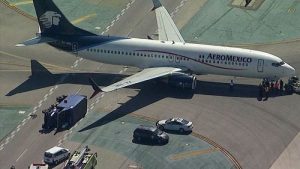 A man and an eight-year-old girl were killed while sunbathing when a small plane landed on to a crowded beach in Portugal on Wednesday, apparently due to engine failure.

The plane made little noise as it skimmed low over hundreds of people on Sao Joao da Caparica’s sands, about 20 kilometres (12 miles) south of Lisbon, witnesses told Portuguese media.

“It happened very fast, there was no chance to prepare… to run,” Enrique Coelho, who was playing with his son at the beach and saw the plane crash, told cable news station SIC Noticias.

The victims were hit by the plane, the commander of the port of Lisbon, Jose Isabel, told reporters at the scene.

The girl was with her parents, who were unhurt, witnesses said.

The two occupants of the plane were unhurt and were led away by police for questioning.

The plane, a Cessna CS-AVA, had been rented by the Aviacao Aerocondor flight training school in Cascais, a seaside town near Lisbon, the school said in a statement.

“The plane was carrying out a training flight with a student and a senior instructor, who had a great deal of experience,” it said.

The instructor could be heard telling a control tower that the plane had suffered engine failure and was going to make an emergency landing, according to a recording broadcast on Portuguese television.

Beachgoers surrounded the plane after it crash landed and confronted its two occupants, the images also showed.

The plane appeared to have a partly broken left wing, which hung lower than the right wing.