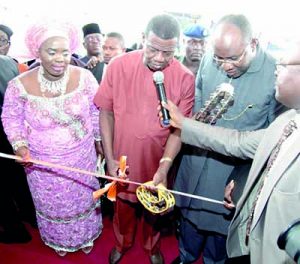 Vice President Yemi Osinbajo on Tuesday inaugurated the 10,000 capacity ecumenical centre built by the Bayelsa state governments in Yenagoa.
Osinbajo who also serves as a pastor in one of the nation’s churches challenged Nigerians to rededicate themselves toward building a nation they would be proud to bequeath to unborn generations.
“We must make sacrifices toward building a nation of our dream. It certainly cannot be easy, but it is very possible,”Osinbajo said at the official inauguration of a 10,000 capacity ecumenical centre in Yenagoa.
The centre was built by the Bayelsa Government and dedicated by Pastor Enoch Adeboye, General Overseer of the Redeemed Christian Church of God (RCCG).
He urged Nigerians to support government’s efforts to rid the nation of all forms of corruption, saying that the menace had stalled national growth over the years.
Represented by Mr Seyi Malono, the State House Chaplain, Osinbajo said that Nigeria was in dire need of strong men and women who were committed to moving it forward.
“We are focused on experiencing the sweetness and joy of child birth; the only thing that can hold us back is corruption. We must deal with it decisively because it affects all institutions,” he said.
The Vice President described the ecumenical centre as “the House of God”, and commended Governor Seriake Dickson for building the edifice.
Adeboye, in a remark, described the centre as a magnificent structure that was pleasing to God and mankind.
He urged Nigerians to always be glad to be found in the house of God, pointing out that it was a blessed sanctuary all humans should always crave after.
Dickson, in a vote of thanks, expressed happiness at the completion of the project, and urged its management board to ensure that it was maintained and preserved.