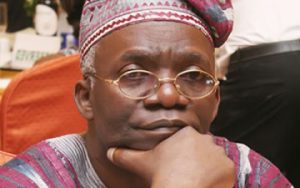 Femi Falana (SAN) a Senior Advocate of Nigeria, reveals that the source of the Boko Haram arms and ammunition are looted from the armoury in Libya. Not without blaming the slave trade in Libya to the fallout from the removal and brutal killing of President Muammar Gaddafi by armed gangs.

In a statement released on Sunday in Lagos, “Why Nigerian victims of slavery cannot sue Libya” Falana says; “Today, not less than five armed gangs are laying claim to the leadership of the country. It has been confirmed that the arms and ammunition looted from the armoury in Libya were sold to the dreaded Boko Haram sect. It is also true that the shameful slave trade which Nigeria is battling with is part of the fallout from the removal and brutal killing of President Muammar Gaddafi by armed gangs supported by the allied forces of imperialism led by the United States under President Barrack Obama.”