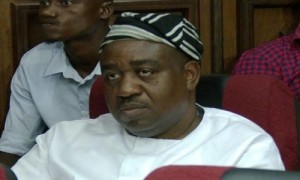 A group within the PDP, identified as Professionals for the Defence of Integrity and Equity, has written an open letter to the Chairman, PDP Caretaker Committee, Senator Ahmed Makarfi, rejecting the appointment of a former Governor of Benue State, Mr. Gabriel Suswam, as the Chairman . Electoral Panel Committee of the party.

In the letter issued on Sunday and signed by its Chairman, Tichus Zungeru, the group said it “observes with dismay and total disgust, the purported appointment of Gabriel Suswan, a former Governor of Benue State, as the chairman of the very crucial electoral panel committee.

The letter read in part, “Mr. Suswam surely does not represent a symbol of unbiased purity, the very image of sanitising wholesomeness without which we cannot have a clean, equitable, unsoiled election.

“For one, Mr. Suswam is a known ally and sworn friend of Mr. Nyesom Wike, the Governor of Rivers State, who does not hide his brazen sponsorship of Uche Secondus for the national chairmanship position of our party.

With such an obviously compromised scenario, we do not need a soothsayer to tell us how Mr. Suswan will behave as chairman of such a very important committee. Naturally he will be working for Secondus.

“Mr Suswam’s appointment is therefore unacceptable to us.”

The group further said Suswam had been tainted by various EFCC cases he had been battling with, saying, “Surely, he is hardly the right person for such a very sensitive job. We therefore demand that the national caretaker committee should strike off his name immediately.”