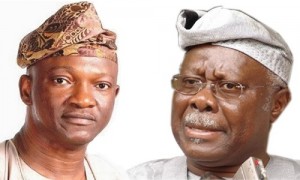 Just few hours after Bode George withdraws from  contesting from the position of PDP national chairman, another aspirant, Jimi Agbaje, has withdrawn from the race.

The withdrawal was announced on his verified Twitter handle, @Jimiagbaje, on Saturday, few hours before the commencement of the national convention to elect new leaders for the PDP.

In a letter addressed to the PDP National Convention Planning Committee, Mr. Agbaje said the PDP had from inception adopted the principle of zoning offices among the country’s geo-political zones.

“In line with such zoning and other parameters I have at different fora, expressed my strong belief that the next National Chairman of our great party should come from the South West,” he said.

He also said he was however, convinced that “with 7 out of all 9 aspirants coming from the South West, this multiplicity of co tenders will work to the detriment of our zone when it comes to voting”.

Mr. Agbaje said delegates’ votes split seven ways will not produce a chairman from the South West, adding, “ it therefore becomes necessary to prune our members down to no more than two”.

He also urged other aspirants from the zone to follow him by stepping down so that the zone “ can have a fighting chance of clinching the National Chairmanship of the PDP”.

Another stalwart of the party from the South West, Bode George, had also announced his withdrawal from the race on Friday evening.