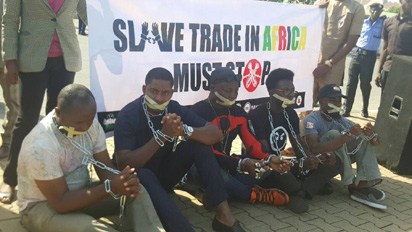 There was drama in Abuja as the group of Good Governance Protesters, under the leadership of musician, Charles Oputa, popularly known as Charly Boy, led a protest to the Ministry of Foreign Affairs, on Monday, to demand well coordinated government action to ameliorate the plight of Nigerians allegedly sold as slaves in Libya. 

The protest which was peaceful had the protesters bound in chains, handcuffs and sealed mouths to drive home their points theatrically.

Last week, Charly Boy led a protest to the Libyan Embassy to register the group’s displeasure over the alleged inhuman treatment of Nigerians by the Libyan authorities in the North African country.

Raphael Adebayo, the spokesman of the protesting group, said, “Our message to the federal government today is very simple and clear that issuing press statement is not enough to give respite to the Nigerians who are suffering in Libya.”

“Concocting and fabricating phone numbers is not enough to give respite to the Nigerians suffering in Libya.”

“What we are demanding is that decisive and genuine actions are taken to repatriate Nigerians who are in Libya and give them a reason to want to be Nigerians. We hope that they are going to act on these demands of ours.”

Top federal government officials in the Ministry including the Nigerian Charge D’Affaire to Libya, Ambassador Iliya Danladi Fachano, while receiving the protesters, said the government is already repatriating Nigerians who are detained in Libya.

They also said that the federal government is currently having series of engagements at various levels to fashion out the best ways to also ensue the trend of illegal migration to Europe especially through Libya is stopped.

Speaking on behalf of the government officials, Ambassador Fachano, said, “By rule as civil servants, we do not speak on what we do but let me tell you what the Nigerian embassy has been doing in Tripoli.”

“The International Organisation for Migration (IOM) usually informs us of the detention camps where Nigerians are kept by the Libyan authorities who refer to them as illegal migrants.”

“Upon the receipts of the IOM intelligence reports, we visit the detention camps to identify our people. After we properly identify them, we issue them emergency travel certificates and schedule a date for their flight home. The IOM finance the flights.”

“We also forward the names of the returnees to Nigeria where officials of our consular department and the National Emergency Management Agency (NEMA) will expect to receive them for rehabilitation and resettlement upon their return to the country.”

“On the global level, migration is not an issue. It is only an issue when it is illegal. Illegal migration is like terrorism. Our duty is to protect both Nigerians that run afoul of the law and those that are legal migrants because we exist in Libya to serve the interest of all Nigerians.”

He added that, “for those sold as slaves, we request for their freedom and take up cases against Nigerians in Libya who are found culpable in cases of alleged slave auction in Tripoli and other parts of Libya.”