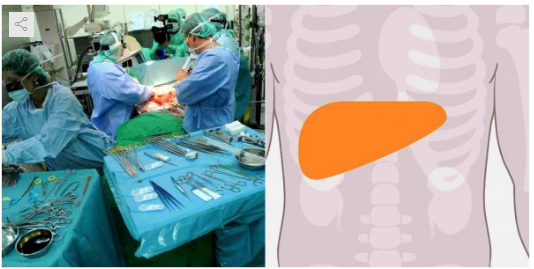 In what appears to be the first of it’s kind, medical doctors in University of Witwatersrand in Johannesburg, South Africa have been forced to conduct a liver transplant from a HIV+ mother to HIV- child

According to reports, the rather drastic decision was taken in order to save the life of the child who had a terminal liver disease and would have died without the transplant

The doctors revealed that one year after the operation, the child may not have caught the virus from her new liver.

Speaking on the issue, Jean Botha, chief surgeon at the university said;

Medication given to the child “may have prevented the transmission of HIV. However, we will only know this conclusively over time”

The team of doctors performed the world’s first liver transplant from a mother living with HIV to her critically-ill HIV-negative child, who had been waiting 180 days for a donor.

The mother, who was being successfully treated with antiretroviral medication, had repeatedly asked to donate her liver to save her child’s life — posing a major ethical dilemma for doctors due to the risk of HIV transmission.

South Africa has the world’s largest HIV treatment programme and the use of HIV-positive donors could help tackle the severe overall shortage of donors.

In 2017, 14 children waiting for liver transplants in Johannesburg died before having the operation.

“We hope that this ground-breaking operation will be the first of many like it and will contribute towards promoting justice and equity in liver transplantation,” June Fabian, research director at the university’s medical centre, said in a press release.