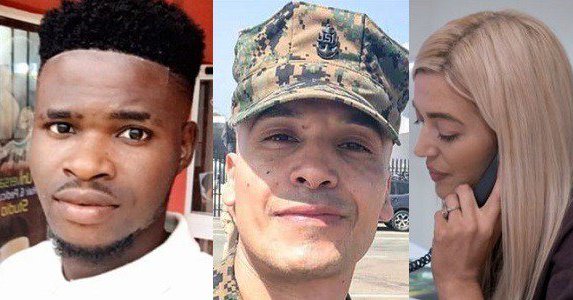 Investigators have unmasked a Nigerian romance scammer, Daniel Joseph Okechkwu, after they set him up.

Apparently, the scammer poses as a US soldier online.

According to BBC, she posed as Kathryn Hunter – a wealthy divorcee looking for love in a bid to unmask the fraudster. According to her;

“It’s not long before the catfish begin to bite. Four men approach me online and they all claim to be US soldiers.

One of the soldiers, who calls himself Paul Richard, comes on strong. The number he rings from has a Nigerian dialing code. After a brief silence, a man with a thick African accent comes on the line.

He doesn’t sound like the American soldier whose picture he is using. But Paul explains away his accent by saying he has a cold. An online reverse image search leads me to the Instagram page of the real owner of the pictures the catfish was using.

For the next few weeks, my producer continues to speak to Richard on the phone as I listen in. Then our catfish makes a mistake. Richard accidentally leaves a name tag – Dan Coolman – on one of his WhatsApp pictures.

We search through all the Dan Coolmans in Nigeria and we find one who runs a barbershop in Ibadan. He’s using the same number that our catfish has been calling us from.

Coolman is another false name, but we discover the phone is registered to Daniel Joseph Okechkwu. We have finally uncovered the real identity of our catfish. We head for Ibadan, but by the time we get there he’s gone.

The doors to the barber shop are locked and locals say it’s been closed for weeks. We decide to call him and tell him who we really are. He confesses and claims it’s the first romance scam he’s ever pulled and that he has been forced to do it because of the closure of his barber shop.

He sounds sincere and he apologises for the way he has treated us. He says he wants to stop being a romance fraudster. But he needs us to give him money, so that he can afford to stop tricking other people out of their cash. It’s a classic catfish twist. They never give up on the scam even when they have been rumbled.“