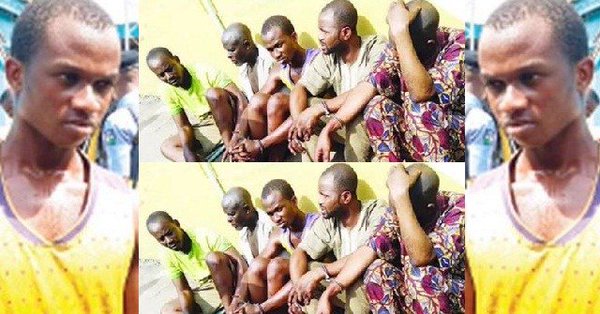 The Ogun State Police command has arrested Victor Nnachata, a 20-year-old 300-level Political Science student of the Nnamdi Azikiwe University, Awka, Anambra State, who revealed that he went to a herbalist because he wanted charms that would make him become a billionaire.

Victor was arrested alongside 4 others suspects in Ogun State. They are: Kabiru Badmos, Nurudeen Shodaolu, Olarewaju Jimoh (a cemetery guard) and Mayewunmi Lukmon.

Nnachata, who came all the way from Onitsha to Abeokuta, in search of the herbalist, disclosed that the man was introduced to him by his friend called Gabriel. He explained that when he met Badmos, the man presented three different types of money-making ritual to him. He was asked to pick one. “I’m into NaijaBet game, but the business was not doing well the way I wanted it.” He said.

“I discussed with Gabriel on how to move it forward. That was when he gave me the phone number of Badmos. When I got to Badmos’ house, I explained everything to him. He gave me three different money rituals to choose from. The first one entails swallowing a bird, and to do that, I would have to use alcohol. The second option would only work for a month, while the third option was that he would prepare soap for me.”

“Badmos said that I would be using the soap to bathe every day before going to my shop,” Nnachata said. The suspect further said that immediately he and Badmos agreed on a price, he transferred N250,000 to the herbalist.

He added: “I decided to embark on the journey in order to grow my business and attract more customers. Most importantly, I wanted to become a billionaire through NaijaBet game.”

On his own part, Badmos said: “When I noticed that I needed human skull for the preparation of the charm, I contacted another herbalist who is a friend to buy it for me. The human skull was bought for N30,000. After they brought it, I grounded it with some other ingredients and added it to a black soap.”

The suspects were arrested after the police received a tip-off that a cemetery guard desecrated a grave in order to steal a human skull.