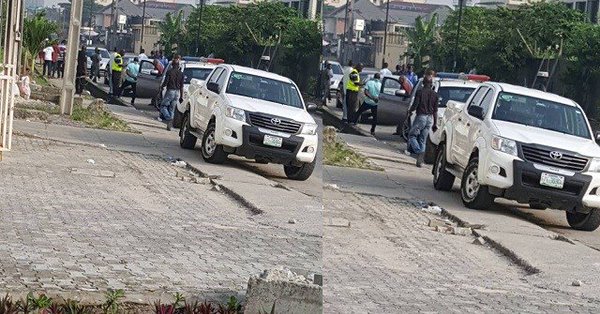 There was pandemonium in the early hours of Monday, 3rd December, 2018 after Residents of Lekki Phase 1 woke up to the sight of a dead man in his car in the area and it is believed that he was killed by ritualists who then took his vital organs.

According to LIB, the man was found bleeding at the back of a silver Toyota Camry at about 6am this morning.

The car plate number cannot be revealed now as his family have not been notified. He was cut open from his chest down to his navel. It is believed that his vital organs were taken.

The car with the dead man in it was found on Dele Adedeji Street, Lekki Phase 1. Residents gathered to view the sight of the man covered in blood. The seats and floor of the car were also covered in blood and drops of blood can be seen on the road near where the car was parked.

The DPO of Maroko, SP Isah Abdumajid,  who was present with his men at the scene, said a statement will be released in due time.