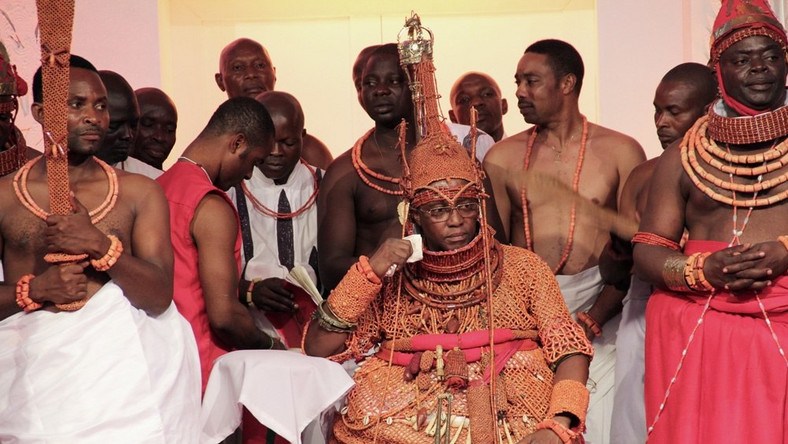 The Oba of Benin, Oba Ewuare II, has warned Nigerian youths to shun money rituals.
Oba Ewuare gave the warning on Sunday during a thanksgiving service at the Holy Aruosa Cathedral in Benin to round off the 2018 annual Igue Festival Celebrations.

He said youths, who cling to the illusion that they could become wealthy by killing people or stealing female underwear for ritual purposes, would no doubt face the consequence.

He added that the behaviour was abominable and alien to Benin customs and tradition.

The monarch interceded for Nigeria and her leaders and urged politicians and youths to shun acts that could undermine free, fair and credible elections in 2019.

The Oba also warned politicians to desist from violence and other acts inimical to the electoral process.

He cautioned youths not to allow themselves to be used as political thugs to cause mayhem during elections.

He announced a N2 million cash donation as welfare fund to assist children of indigent worshipers of Holy Aruosa Cathedral and the development of the church which was built in 15th Century.

The traditional ruler also announced a N50, 000 cash gift for the church choir in addition to the sum of N100, 000 donation to other departments of the church.

In his message, the Chief Priest of Holy Aruosa Cathedral, Ohen-Osa Harrison Okao, congratulated the Oba, who was clad in a white royal apparel with a beaded cap and a pair of glasses.

He implored the congregation not to adulterate Benin culture and traditions.

The News Agency of Nigeria (NAN) reports that the Oba was accompanied by his wives to the church service which was conducted in Edo language.