Super Eagles of Nigeria midfielder, John Ogu has shown his magnanimous side by doling out a cash of N350 000 to offset the medical bill of a female basketball player, Deborah Onah who is currently battling with tuberculosis of the spine.

The footballer made the donation after the Titans basketball made it known via its official Twitter handle that one of its players is currently battling the disease.

In a swift response, the talented midfielder stated that he would b dropping the N350 000 needed for the medical bill immediately.

”One of our players, DEBORAH ONAH is down with Tuberculosis of the Spine. We solicit financial support as she undergoes treatment, at National Hospital Abuja. The goal is 350,000 Naira for cardiovascular surgery. No amount is too small.” 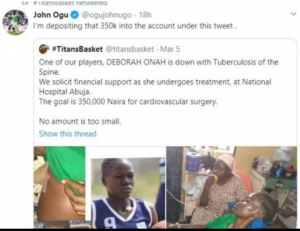