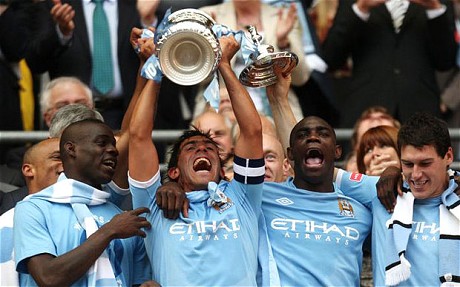 Manchester City,one of the richest clubs in the world, after about £300million investment from Sheik Mansour has now produced Champions League qualification and an FA Cup.

It is worthy of note that Yaya Toure – reportedly the highest paid player in the Barclays Premier League on £185,000 a week – was once again the match winner,having scored the winning goal at the semi-final a couple of weeks ago.

Manchester City had not won the FA cup themselves since 1969 but the Potters had not even been to a final.

The build-up to the cup final day had been dominated by talk of the competition being further devalued by the scheduling of the game.

But try telling that to the tens of thousands of City and Stoke fans crammed into Wembley stadium on saturday afternoon for what was the first cup final for both clubs for more than a generation.

And try telling it to the managers, who each gambled on the fitness of key players as Carlos Tevez, Matthew Etherington and Robert Huth.

It was a sign of things to come as Mancini’s men belied their reputation for caution in a dominant first-half display.

Ryan Shawcross almost put into his own net and Toure drilled just wide from long range.

And City would have been ahead midway through the half but for a world-class save from Sorensen, who somehow clawed behind Mario Balotelli’s top-corner-bound curler.

Sorensen survived being beaten to a long ball by Tevez and got away with spilling Vincent Kompany’s tame long-ranger.

Stoke had gone some way to shattering their own reputation in their free-flowing semi-final demolition of Bolton.

Long throws and set-pieces were once again the order of the day, although they did fashion a chance in open play when Vincent Kompany threw his body at Kenwyne Jones’ close-range shot.

Emerging from half-time talk, Stoke tore into City early in the second half, Jermaine Pennant playing through the pain of a first-half ankle injury to lead the charge.

But they were unable to produce the finishing touch and were almost caught on the break when Tevez squared for Silva, who hesitated just long enough for Shawcross to nick the ball away.

Joe Hart had been a spectator all afternoon but he came to City’s rescue just past the hour mark when Jones beat Joleon Lescott to a long ball before poking his finish too close to the keeper.

Etherington was immediately withdrawn for Dean Whitehead.Mancini responded to City’s second-half slump by throwing on Adam Johnson for Gareth Barry and it immediately paid off.

City won the ball on the edge of the area and Balotelli exchanged passes via Huth, with the Italian’s shot blocked by Marc Wilson straight to Toure to blast home.

Desperate defending and a fine save prevented Silva wrapping up victory on two occassions, with Stoke throwing on John Carew in a bid to keep their dream alive.

City manager finally went defensive when he withdrew Tevez for Pablo Zabaleta but despite late Stoke pressure, City deservedly hung on to win their first ever FA cup sice 1969.
By Collins Odum