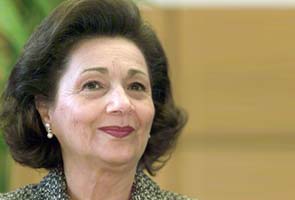 Suzanne Mubarak, the wife of Egypt’s ousted president Hosni Mubarak, was granted bail in a corruption probe after agreeing to hand over her assets amounting to over USD 3 million and a villa to the government as her husband pledged to do the same in a bid to secure an amnesty.

Suzanne was taken into custody on Friday after being questioned by anti-corruption investigators probing allegations that she abused her position to amass illicit wealth.

She had been held on corruption charges in a hospital of the Red Sea resort of Sharm el-Sheikh, along with her husband, who is also being investigated for allegedly ordering the shooting of anti-regime protesters.

Egypt’s public prosecutor today ordered the release of the former first lady on bail, Al Arabiya reported.
Egypt’s justice minister was quoted as saying by the channel that the country’s judiciary, which is investigating former first lady for corruption, would be satisfied if she returns the money to the state.

The country’s justice ministry which ordered Mrs Mubarak’s detention on Friday, “has decided to release her after she handed over to the state money held in two bank accounts in Egypt, amounting to 24 million pounds,” (around USD 4 million/2.8 million euros), an official statement said.

Meanwhile, Mubarak, 83, is said to be preparing to hand over his assets and apologise to the Egyptian people in return for an amnesty from the military rulers who took power when he was overthrown on February 11.

The former president is said to be drafting a letter which will be broadcast on Egyptian and Arabic channels “apologizing on behalf of himself and his family for any offence caused to the people,” independent daily Al-Shorouk reported.

According to the daily, he is also to apologise “for any acts which may have stemmed from false information passed on to him by his advisers”.

Mubarak and his wife are in hospital after both reportedly suffered heart attacks during questioning in a graft probe.
Source: ndtv.com