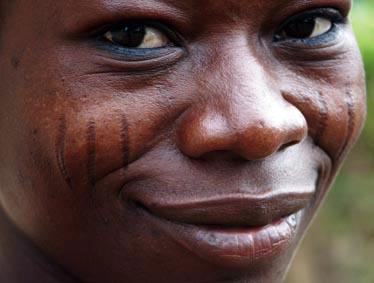 Marked for Life
Nigeria is a beautiful country. It is blessed with rich human and natural resources (people making speeches never pass up the chance to use these line). Everything about Nigeria speaks out beauty (argument for another day), from her wonderful hills to her lovely mountains to the serenading songs and dances of her people to her appetizing and mouth-watering delicacies. It is a country with diverse peoples and cultures and also lovely traditions, but above all, it is a country where some people still give their children tribal marks and say it is beautiful.

As a Nigerian, the issue of having tribal marks is a serious business. One gets to see how serious this is when you chatting with any beautifully Slashed (I couldn’t see a better word) Yoruba cab driver or a young orange seller, or maybe any of those Igala civil servants we see in offices or some Gbagyi woman on the street carrying firewood, just to mention but a few.

While having tribal marks might be done to mark out a person as belonging to a certain tribe or with the idea that it in some way (a way I don’t really understand yet) beautifies the person, I believe that it is done to show off a person as an example for others or some sort of punishment. This idea is not as far fetched as it seems. Now, let us look at the case of a parent or guardian, in real life or in a Nigerian flick threatening a child that he/she (well the threat is mostly done by mums or aunties) would cut the child with a blade and put pepper in the injury……that would just be giving the child marks, and yeah!, you can add tribal in front of the ‘marks’.

Another supporting point would be about the first man on earth who was given a tribal mark (but who knows, maybe it was just one)…I know it is arguable and someone would want to say it shouldn’t be called a tribal mark, but the mark God Almighty in all his splendor, decided to give to Cain for murdering his brother is indeed a tribal mark (Word!!)

Designing of tribal marks can mostly be done by professionals, and in my view, by some wicked disgruntled old man or a horrible wrinkled old woman. (Believe me I have nothing against oldies). Whatever the case maybe, I am sure it has to be old people…people with no joy at all. Or how else can it be explained that a parent who mostly likely was made to go under the blade would (ignorantly) offer their child to an oldie, who is supposed to be a child lover, and all the oldie does is take a blade to the child’s face while screaming to the parent(s): Hold him still, Ehen! Now put this ointment on him…and sure enough the ointment would be a foul smelling concoction which they would claim would ease the pain and speed the healing…arrgh!!

Like mutilating the faces of little children is not enough, I was reading a piece on making tribal marks and there was this part about how the Yoruba’s get to have very thick and deep marks. Now, this is for the strong at heart…hehe!! Well, what they do is tear up the face with a blade and then use their arthritic fingers to widen the slash and while the child is crying and wondering why he or she is being punished, the oldie would say…leave him alone, let him cry, he is cleansing his soul or it would help him heal fast.

While the Yoruba’s might go out for very deep gashes on their children faces, the Igbo’s just make tiny slashes on the side of their temples, mostly in two’s or threes (symbol of akonauche they might think). The Hausa’s would generally just go for one long slash which would run from the nose in a somewhat slanting style. The Igala’s…oh! Those ones love to slash…they slash and slash and sometimes there is no more space to slash, like one of my CRK teachers who had twenty-one slashes on her face, off course she was an Igala woman. Whenever she smiles, it felt as if the whole of her face was smiling and whenever she screamed, it felt as if her face was opening up, sure thing I dropped CRK in SS2.

Then again, there is the Gbagyi’s who just close their eyes and make two slashes, then Fulani’s who make beautiful slashes that look somewhat like arrows, not only that, the slashes are also crooked, like the slasher had shaky hands when administering it to the slashee…hehe!. Those from the south-side, talking about the Deltans and Bayelsans (It just sounds right to calling hem like that), would opt for tiny marks on both cheeks but those that don’t have any at all would most likely have a problem adorning a bikini in public because they (the parents and the slashers) give them a thousand marks on their body. They would claim it helps them cure the children of illnesses, so when a child coughs, he gets slashed, when he sneezes, he gets it, when he farts, he gets it, when he cries, he gets it. There is a slash for everything. Maybe, you miss your period; you get it…who knows??>>

However intriguing tribal marks maybe and no matter how civilized or westernized we claim to be, to be marked hurts. Heck! It could even be stigmatizing, so if you reading this, let us work together to build a tribal mark free nation (this is me canvassing, hehe!!), that way we at least get to prevent a scenario where God says: The clean guys to my right, the bads ones to my left and the marked ones…ummhh! What did you say happened to you guys again?? Also, I won’t have to endure sitting beside some baby albino in a bus whose parents didn’t feel there was any harm in giving him some Yoruba slashes…True story). I don’t see a bright future for the boy, or what do you think??

This guest blog post was written by Kelechi Kemnele of www.bellybature.wordpress.com