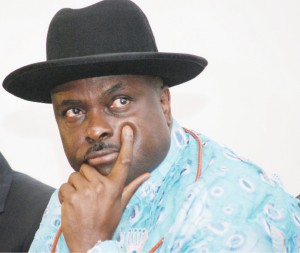 James Ibori, who had been standing trial before Judge Anthony Pitts of the Southwark Crown Court 9 in London for corruption and alleged theft of $250 million, plead guilty to 10 counts of conspiracy to defraud and money laundering.

Ibori’s wife Theresa, sister Christine Ibori-Idie, and mistress Udoamaka Okoronkwo have all already been convicted for their part in the money-laundering.

One of the counts Ibori admitted related to a $37m (£23m) fraud pertaining to the sale of Delta State’s share in Nigerian privatised phone company company V Mobile.

The Southwark Crown Court was told the amount Ibori stole from the people of Delta state was “unquantified”.

The prosecution stated that as Delta State governor, Ibori racked up credit card bills of $200,000 (£126,000) per month on a luxury lifestyle, including running a fleet of armoured Range Rovers.

Ibori admitted one count of conspiracy to launder money, five of money laundering and one of obtaining a property transfer by deception over the theft of more than £25m while he was governor. 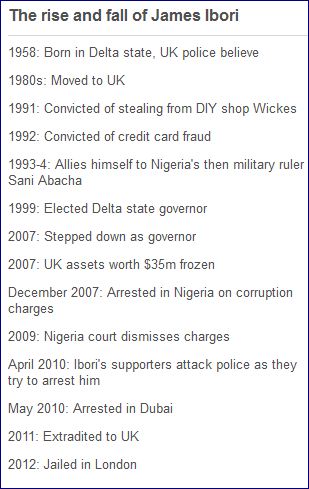 He also pleaded guilty to conspiracy to defraud, conspiracy to make false instruments, and one count of money laundering linked to a $37m (£23.3m) share fraud surrounding the sale of shares in VMobile.

Prosecutor Sasha Wass told the court Ibori had accepted he was involved in “wide-scale theft, fraud and corruption when he was governor of Delta State.”

Ibori, who is not new to the UK’s prison, came to the UK in the 1980s and worked as a cashier at a Wickes DIY store in Neasden, north west London.

He then returned to Nigeria and began his climb up the ranks of the PDP, becoming delta state governor in 1999.

“James Ibori’s sentence sends a strong and important message to those who seek to use Britain as a refuge for their crimes.

“Corruption is a cancer in developing countries and the coalition government has a zero-tolerance approach to it.” International Development Secretary Andrew Mitchell said.

Reports say that he was trying to buy a plane for £12m at the time he was arrested.