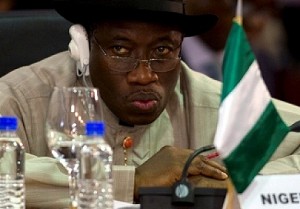 A group in the Niger Delta known as the Niger Delta Peace Foundation (NDPF), has on Friday in Abuja called on President Goodluck Jonathan to “sit up and be alive to his responsibilities” in the protection of lives and property. The group says “he has deviated.”

The NDPF also suggested that if the Presidency could no longer tackle the security challenges in the country, the National Assembly should commence the processes for the enactment of a law for the creation of state police in Nigeria.

According to the national president of NDPF, Chief Daniel Ebahor, during a news briefing where he also called on the President to overhaul the Federal Executive Council, he says, “We are mature to have a state police; we support state governments agitating for state police. If the government is not making serious efforts to tackle the security challenges in the country, the lawmakers should do something in that respect.”

Ebahor coontinues, “The executive should sit up; this is a wake-up call on Jonathan to perform because he has deviated. The security challenges in the country have nothing to do with budget implementation. There is no work, no job and no money and you are saying you have security challenges… That is why kidnapping, militancy and terrorism are rife. The recent happenings in our country must give serious concern and mental torture to every right-thinking Nigerian.”