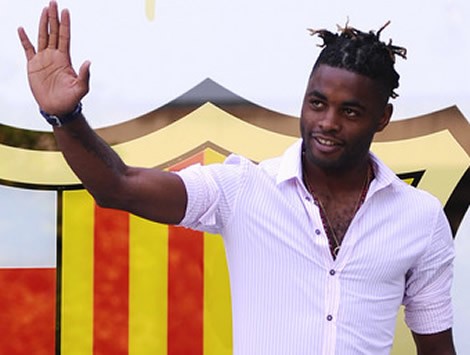 Reports have it that ALEX SONG last night taunted Arsenal after completing his £15million switch to Barcelona by declaring: I’ve come here to win EVERYTHING.

Song said: “I’m so happy to be here because everyone knows Barcelona are the best team in the world. I’m feeling like a young boy.

“To be part of this team is something I wanted to achieve when I was young.

“I always tried to think ‘I will play for Barcelona’ and now I have the opportunity to be here and play with the best players in the world — Messi, Xavi, Iniesta, Fabregas.”

Song’s words will only fuel claims that Arsenal’s failure to sign big names leads to an exodus of stars hungry to win trophies and not be also-runs.

Song added: “Barcelona are the best team in the world because they have all the best players.

“It’s very hard to fight to get the space to play.

“I expect the team to continue winning because they are a winning team — they’ve won everything.

“I hope this year we will win everything. I will just try to do my job to give my best in training and when the boss gives me a chance to play I will do it.

“Today is a good day for me and my family.”

He said: “Cesc is a very good friend and will help me a lot to come into the team. It’s good for me to have a guy like him.”