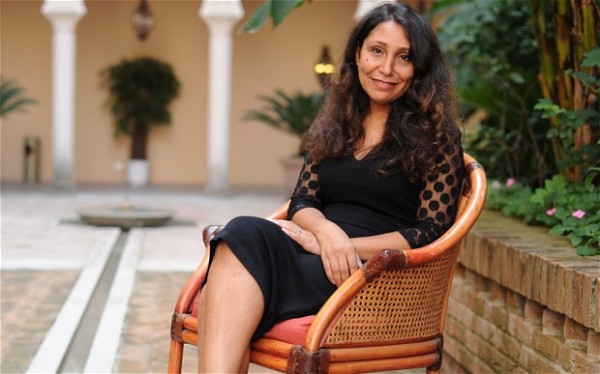 The first female director in Saudi Arabia has made her debut at a film festival in Venice. She tried to make people see through the limitations placed on women in the conservative Islamic kingdom through the tale of a strong-willed 10-year-old girl living in Riyadh.

According to the director, the film is the first to have been entirely shot in Saudi Arabia and it follows the everyday life of young Wadjda and her attempts to bypass limitations and break social barriers at school and at home.

Always chided for not wearing a veil, listening to pop music and not hiding in the presence of men, Wadjda uses her craftiness to get her own way.

When she sees a bicycle for sale that would see her race against a male friend, she schemes a plan to raise the money needed to buy it in spite of her mother’s opposition, as respectable girls do not cycle in Saudi Arabia.

She later learns verses from the Koran by heart to enroll in a school religious competition with the hope of winning the cash prize that would pay for the bike she needed, and in the process puts up pretence to have become the model pious girl everyone wants her to be.

Director Haifaa Al Mansour said “Wadjda” aims to address the segregation of women in Saudi Arabia, where they hold a lower legal status to men in all things; are banned from driving and need a male guardian’s permission to work, travel or open a bank account.

She said after her film premiered in Venice; “It’s easy to say it’s a difficult, conservative place for a woman and do nothing about it, but we need to push forward and hope we can help make it a more relaxed and tolerant society”.

There has been signs of change in Saudi society as the upcoming ones are already challenging rigid customs in the land, one of the reasons that led to participation of Saudi women for the first time in Olympics history, in the London Olympics.

‎Directing in Saudi has been hard on Al Mansour with mixing with men seen as a taboo especially in conservative areas of the country. She would hide in vans at times and communicate with her male actors on walkie-talkie. She’s happy though that things are getting better. According to her, “It is not like before, although I can’t say it’s like heaven. Society won’t just accept it, people will put pressure on women to stay home, but we have to fight.”

Although her film may have limited audience in her homeland, producers have however promised a wide distribution on DVD and TV, as movie theatres are illegal in Saudi Arabia.