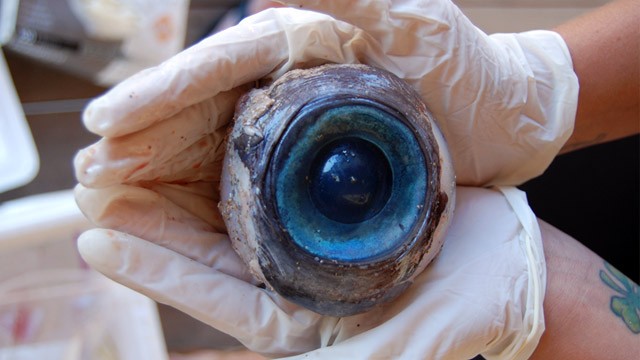 What would you do if when you were strolling at the beach, you stared out at the ocean, and the ocean returned the gesture; it stared back?

Gino Covacci was strolling down the beach on Wednesday and saw something ball-like and went to investigate. When he rolled the object over, he found it was, indeed, a ball—a softball-sized blue eyeball.

“It was nice and clear, it was fresh,” Covacci told the Sun-Sentinel in South Florida.

Covacci immediately handed over what he found and believed to be the eye of a squid or octopus to the Florida Fish and Wildlife Conservation Commission, which planned to preserve the eye and send it to St. Petersburg for analysis. However, experts are not so sure the specimen is the eye of an octopus or a squid.

“Because of bone around the eye, we can probably rule out a squid,” Florida Fish and Wildlife Conservation Commission spokesman, Carli Segelson told reporters.

When asked what else can possess such huge an eye since she claimed it couldn’t have been octopus or squid which are both invertebrates, Segelson said no one can be sure for now.

“It would be premature to guess,” said Segelson. One possibility is that the eye came from a large fish but she declined to speculate further.

“Swordfish is one possibility,” said Segelson, “but we can’t even say one hundred percent that it’s a fish.”