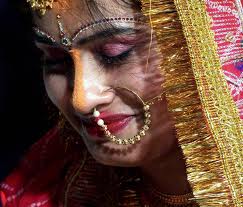 A newly-wed bride opted for divorce soon after the marriage formalities were completed in Bihar. She found her new husband too ‘rude’ and married a ‘more sober’ youth who had come to the wedding ceremony.

The incident occurred at Kasba village in Begusarai district, some 120km east of the Bihar capital Patna, India.

Reports say Sifat and Rashid were to get married on Saturday evening. Hundreds of guests had turned up to witness the marriage. Trouble began soon after the bride’s family urged the groom to wear clothes given to him by them for the event, but he refused to comply to their request.

“This led to a verbal altercation between the bride and groom’s families, after which the bride divorced her just-wed husband, but married another boy who had come for the marriage with the consent of the family,” said a village council official Mashkoor Alam.

“It was a peculiar incident. I have never seen such a thing in my entire life,” remarked Alam, the deputy chief of the local village panchayat (council). [GN]