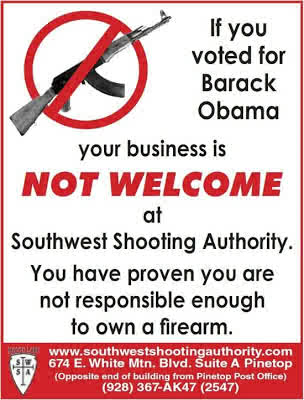 We’ve seen a rash of crazy responses to President Obama’s re-election last week – employers cutting employee benefits, riots, woman running down husband with a car, even a suicide. But this one is probably the most misguided. A gun store owner in Arizona has banned Obama voters from his shop, taking out an ad in his local paper to cement his stance.

The owner’s message is as follows:

To Whom it May Concern:

We will try to demonstrate once again that the bottom line for our business is principle, not money.

Yes, it has been damaging at times but our values are intact.

Effective immediately, if you voted for Obama, your money is no good here. You have proven beyond a doubt that you are not responsible enough to own a firearm. We have just put a sign up on the front door to save you the trouble of walking all the way in here…

I took this ad out in our local paper. It will come out in the White Mountain Independent tomorrow, 9 November

The store, which is in the tiny town of Pinetop – population: 4,156 – had only 736 Obama voters, according to the Phoenix News Times. That’s 736 less potential customers for the store. That’s quite the dent in a business already catering to a small area, but if owner Cope Reynolds’ political convictions are that strong, he’ll probably feel more spiritually rich. [VN]