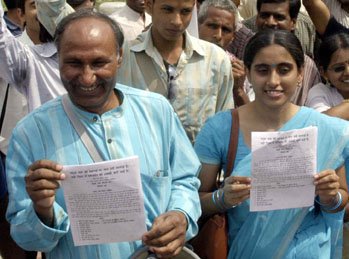 You think you know about love? The ‘Love Guru’ will prove you wrong and teach you all you don’t know.

After he was dismissed from service for professing love for his student whom he eventually married, a university professor dubbed “the Love Guru” is setting up a school in Bihar to teach students lessons in love.

Popularly known as the “Love Guru” among young people in India, Patna University professor of Hindi, Matuk Nath Chaudhary, is setting up a first-of-its-kind “love school” at his native village Jayrampur in eastern Bihar’s Bhagalpur district.

“Immortal love drives us towards creation… Love means sacrifice; there is no place for selfishness in it,” professor Chaudhary, 58, who is setting up this school under his own inspection told the media on Sunday.

According to him, love has two faces — the first one is destructive while the second is creative. “Sadly, today’s youth class is caught up with the second form of love. We will teach them how to set examples for the society by displaying supreme sacrifice,” said professor Chaudhary who was reinstated last year following revocation of termination of service by the Governor in his capacity as the Chancellor of the Universities of Bihar.

He was sacked from service in 2009 after his extramarital affair with his student Julie — less than half his age — became public. However, his job was restored after he, along with Julie and sympathisers, staged a sit-in in Patna seeking reinstatement of his job.

Chaudhary is more worried about the kind of education being imparted to students in schools, saying it is incomplete”. “School education is teaching students only about the outside world; it is not teaching them about inner knowledge. There must a balance between the two,” he said.

The soft-spoken professor hit headlines during the 2010 Bihar assembly elections when he contested the elections as an Independent candidate while promising to set up “lovers’ parks” in Patna where lovers could meet quite easily.

The idyllic setting — envisioned with plenty of trees and shrubs — will have therapists and counsellors on hand to dispense advice on love, sex and relationships.

To give shape to his “Utopean” idea, Chaudhary has even formed a “Love Party”. In the recent assembly elections held in Uttar Pradesh, India, Chaudhary even fielded some candidates from his party there although none of his candidates won.

Thought they say love conquers all.