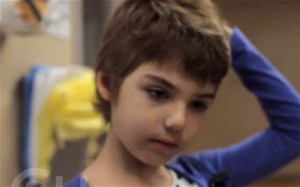 In a most amazing development, US doctors in Philadelphia said they have saved a seven-year-old girl who was close to dying from leukemia with a pioneering use of a least expected agent – a modified form of the HIV virus! Leukemia is a cancer of the blood cells and it normally starts in the bone marrow.

After fighting her disease with chemotherapy for almost two years and suffering two relapses, Emily Whitehead “faced grim prospects,” doctors at Children’s Hospital of Philadelphia had said. So in February this year they agreed to take her on in an experimental program that fought fire with fire. Helped by a genetically altered HIV virus — stripped of its devastating properties that cause AIDS — doctors turned the girl’s own immune cells into a superior force able to rout the “aggressive” leukemia.

Emily’s treatment was one of the very first of its kind and cannot yet be considered “a magic bullet,” the hospital said. But in her case, it apparently worked completely. Initially, millions of the girl’s natural immune system cells were removed. Then the modified HIV virus was used to carry in a new gene that would boost the immune cells and help them spot, then attack cancer cells that had previously been able to sneak in “under the radar,” the hospital said on its website. Finally the rebooted immune cells were sent back in to do their work.

According to the hospital, “The researchers have created a guided missile that locks in on and kills B cells, thereby attacking B-cell leukemia.” Meanwhile, Pediatric oncologist Stephan Grupp, who cared for the girl, explained that there was never any danger of AIDS during the process: “The way we get the new gene into the T cells (immune cells) is by using a virus. This virus was developed from the HIV virus, however all of the parts of the HIV virus that can cause disease are removed… It is impossible to catch HIV or any other infection. What’s left is the property of the HIV virus that allows it to put new genes into cells,” he had said in an email.

However, during the treatment, Emily became very ill and went into the intensive care unit, underlining how risky the procedure can be. But, drugs that partly block the immune reaction were administered, without interfering with the anti-leukemia action, and she recovered, the hospital said. The result was “complete” and best of all, the doctors say, the boosted immune shield continues “to remain in the patient’s body to protect against a recurrence of the cancer.”

“She has no leukemia in her body for any test that we can do — even the most sensitive tests,” Grupp told ABC television. “We need to see that the remission goes on for a couple of years before we think about whether she is cured or not. It is too soon to say.”

Emily was one of a dozen people to have had the treatment. Three adults also had complete remissions, with two of them now clear of cancer for more than two years. Four other adults showed improvements but did not go into complete remission. One child improved but then relapsed, and the treatment did not work for two adults. Researchers said the treatment, which costs about $20,000 for each patient, was in the early stages but they hope it could ultimately replace risky bone marrow transplants.