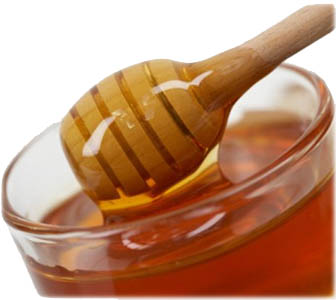 Honey is composed of two main sugars, levulose and dextrose. These sugars do not need to be broken down by the digestive process, so honey is quickly absorbed into the bloodstream, giving a quick energy boost to the body. It also contains protein, vitamins and minerals, but no cholesterol.
Darker honeys have more nutrients than light ones. Vitamin and mineral content depend on the floral source of the honey. Honey has less than 2% sodium, and as such can be labeled as a sodium-free product by Food & Drug Administration standards.

Honey has been used in many medical applications over the years, but recent studies are now able to prove its beneficial nature in some applications, including as antibacterial topical treatment for burns and ulcers. The reason is because honey has osmotic properties; that is, it tends to withdraw water. Water molecules strongly react with the sugars in honey, leaving little water available for microorganisms. Thus, infection-causing bacteria is literally dehydrated to death by honey.

Honey has also been used to successfully store skin grafts for up to twelve weeks. Lab tests have shown that different types of honey have differing antibacterial sensitivities, so research continues to determine which floral sources are most beneficial.

Warning! Honey is not for babies!

Although honey is a natural, healthy food that normally cannot support bacterial life, it’s important to note that it can carry C. botulinum spores which may be harmful to the undeveloped immune systems of infants. The old practice of dipping pacifiers into honey to soothe crying babies should be aborted.

Infants up to one year of age should not be fed raw honey, as their immune systems are not yet developed enough to fend off this normally benign strain. Infection can cause a flaccid paralysis weakening the baby’s muscles, causing a “floppy” baby. Other symptoms include constipation, lethargy, poor feeding, weak cry, droopy eyelids, expressionless face, drooling or swallowing difficulty, and occasionally, respiratory arrest. By the age of one year, most children develop enough to resist this normally benign strain of botulinum.

It must also be pointed out that infant botulism is not exclusive to the ingestion of honey. The botulism spore can also be found in dust, soil and other uncooked foods that older children and adults are exposed to daily. The risk is minimal. Yet, it is an avoidable risk, and honey should not be fed to infants under the age of twelve months. Don’t play the odds.