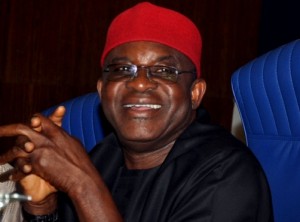 The Senate will be fully represented in South Africa on Sunday for the final clash of the 2013 African Cup of Nations (AFCON) between Nigeria and Burkina Faso, Senate President David Mark has said.

Mark said this yesterday while congratulating the coaching crew and players on their well deserved victory over the Eagles of Mali in Wednesday’s semi-final tie in Durban.
The Senate president, who disclosed that the senators’ prayers had so far worked for the national team in the ongoing soccer competition, called for intensified prayers for the Super Eagles.

“I believe very many of you watched the match on Wednesday. I want to congratulate the Super Eagles of Nigeria on behalf of the nation and of course, the entire National Assembly on their victory over Mali. I think our prayers have really worked so far. Our prayers have indeed spurred the Super Eagles into action. Our prayer groups must therefore intensify their prayers because it is the final victory that would crown us the champion of football in Africa.

“I will go to South Africa to represent all of you on Sunday. So, we will need serious prayers. So far, I think our prayers have worked. Our prayers have spurred the Super Eagles into action. And I want to thank all of you for your support”, said Mark.