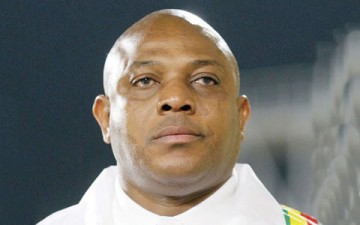 Super Eagles coach, Stephen Keshi has stated that the national team door is still open to the likes of Osaze Odemwingie and Obafemi Martins who were cut from the team on the way to South Africa 2013.

Keshi who spoke on Saturday in Lagos (full interview on page 90) reiterated that he only dropped those players because he could not accommodate every good Nigerian player in one competition.

He said, “Unless they don’t want to play for Nigeria anymore, otherwise they have a place in the team. We have a list of 50 players that we are working with. On the list are Osaze (Odemwingie), (Obafemi) Martins, (Victor) Anichebe and many others. At every stage we need them they will join us. We will use every good Nigerian player to make the team better unless the player does not want to play for Nigeria. The door is still very wide open.”

Even though the coach took many people by surprise when he left out Martins from the final camping in Portugal, many Nigerians were certain that Osaze’s name may never be mentioned around the national team again following the player’s angry reaction to his exclusion from the AFCON team. But Keshi insists that the team was yet to get the right rhythm and would therefore need continuous test for each area.

Apart from those players, Keshi added that Joseph Yobo who got minimal playing minutes in South Africa would continue with the team.

“He got injured and his replacement was good and so I could not drop a good player. And it was the same with some other areas because we were just looking for the best players. He is still a very good part of the team.

“We are still building and I am happy you people are now speaking in positive fashion believing we can also win the World Cup. It’s all football with 11 players against 11 others. The truth is that we have not reached where we are heading. We are still looking at those areas where we are lacking to fill up properly. We want the right players in the right places and so we have to keep working until we get the kind of team we want. People always talk about the 1994 team as being the best but that took a lot of patience to achieve. Nigerians have to be patient with us until we get there.”